Millenaries of the lands in tolna

The archaeological exhibition of Wosinsky Mór Megyei Múzeum (County Museum Wosinsky Mór) gives an insight into the changes of the people’s life of in Tolna County from the Prehistory until the settlement in the Carpathian Basin.

The app. 25-30 thousand years old skeleton of a mammoth-calf exhibited in the first room was found in Dombóvár. The knapped stone blades that were found at the hunter farm in Szekszárd-Palánk originate also from the Paleolithic age. The 2nd exhibition case contains a human skull fossil from the Danube, which shows Neanderthal-man characteristics.

Main feature of the new stone age was the settled life based on farming and stock-raising. The finest artifacts (cup, round-bottomed pot, etc.) of the Starcevo-culture that was evolved in southern Transdanubia in the early Neolithic times, stem from Medina – a township in Tolna. At the time also god-illustrations were made, representing the goddess of fertility, Magna Mater.

In Central-Eastern Europe the almost 1000 years rule of the ceramics with line decoration was followed by the Late Neolithic “lengyeli kultúra” (Lengyel Culture) about 3-4000 B.C. The people were mainly growing plants, but piggery and cattlery played also a big role. The most common dish shapes were tube-pedestal bowls and dishes with narrow, pulled-together rims. The technical development can be seen at the pierced, grinded stone axes; tools made of cloven stone, bones and horns are typical at the time. The dead were buried lying on their side with their legs pulled up. As it can be seen at the exhibited part of the B1 grave group from Mórágy-Flintstone Hill (mórágy-tűzkődomb), the buried had something to eat and drink in their graves, so they don’t get short of nutriments during their existence in the afterland (other-world).

The New Stone Age was followed by the Copper-Age. In the beginning, only jewels were made from the valuable metal, but later more and more tools and other articles.

Later, the people started to compound copper by adding different additives. This resulted a new metal, the bronze, which gave the name to the epoch of the 2nd millennium B.C. (Bronze Age). On the tell-settlements, that were the results of staying at the same place for a longer time, several animal bones, burnt grain leftovers tools and articles were found. These showed developed farming, stock raising and trade. The nation which lived in this area in the Middle Bronze Age got its name from the richly (with lime lining) decorated pots, exhibited in the case no. 12.

The treasure findings from the Late Bronze Age represent a rich bronzing. A specially pretty memory of this age is the carriage-formed urn found in a grave at Kánya. This article

represents the belief of the journey to the afterland, and also points to one of the people’s means of transport. In the hexagonal exhibition case in the middle, you can find the clothing of men and women in the Late Bronze Age.

In the Early Iron Age, a population from the East shoved up on our territory. The pre-skythian and skythian articles in case no 16. are parts of the material culture of this population, that can be traced back until the Caucasus.

Some memories about the Celtics, who are of western origin, are exhibited in the cases near the door. They were the first to use iron articles of a bigger amount. The bore statue and the weapons placed folded into their graves are indicative of their religion. They used specific shaped coin-money made of silver and bronze. Their autonomous existence was ended by the roman conquest.

After the military occupation, the Romans have organized the territory of the present Transdanubia -by building out a new system of administration – to one of their provinces, called Pannonia. The mainly Celtic native population lived for a long time also after the occupation under the same economical and social conditions.

To keep the defense system, the Romans needed quite a lot of soldiers. Because of this, the native population was trooped into auxiliary troops, where after 25years of military service, the soldiers obtained roman citizen rights. They got a diploma about this, incised into a bronze plate. In times of peace, the soldiers also did production work, this is also indicated by the brickstamps. The bronze belt garniture and the accoutrement are artifacts connected also to the military lifestyle.

Some interesting ceramic pot types of the Roman epoch can be seen in the next exhibition case. The lamps, the different glazed and unglazed pots used for storing or cooking represent the all-day life of people at the time.

The limestone grave casket, found at the borders of Alsópél, contained the ashes of a dead from the second part of the 1st century. The diversity of people living there resulted a variegate culture and religious life. From the god-statues stemming of our county, the Concordia statue found in Tamási emerges with its beauty together with the sacrifice jug and the bronze statue of Jupiter. These three came up form a house sanctuary. The statues of other gods have also been used in a house sanctuary: Laár’s statue, the Mater Matula statues, a Statue of Pallas Athena reflecting the Greek religion; and the Syrian Mithras’s statue fragment.

You can find a plowchain, scythes and sickles among the articles referring to farming. The iron grapeclipper knives prove that the Romans have naturalized the culture of grape growing and viniculture in Pannonia. The highly decorated, red colored terra sigillata pots got into our territory as imports. The balance and the balance weights, the silver and bronze coins, that were once in circulation indicate prosperous trading in the roman times. From the III. century, a big amount of glass articles were brought by merchants into Pannonia from the Rhine area. The wooden bucket from Mucsfa has the interesting feature, that the wooden parts made of yew originate also from the roman times. The Christianity, which followers were previously hunted, was made to state-religion in the Roman Empire in the IV. Century, but at the same time, heretic variants of the religion also gained space. One of these is the Arianus-religion, which did not differ in much form the official state religion, only in its ceremonial order. The northernmost Arius imagery can be found on one of the bricks of the last exhibition case. A Christogram has been drawn and chiseled on an other brick and in the end gilt bronze fibula, found at Bátaszék-kövesd. From the second half of the IV. century the empire was threatened by tribes attacking from the East, and by the Germans living at the Northern borders. The continuous attacks to the local population led to the ruination of the most typical idiosyncrasy of the roman life, the city life. The split up of the Roman Empire was followed in our territory by an other epoch – also leaving many exciting historical happenings and interesting archeological findings for us behind – , the Migration age, which history can be followed back in the second room.

In the I-II. century the desertification of the Asian areas led to overpopulation. Less and less could manage to live on the lands of their ancestors, so they were forced to start searching for a new home.

In 375, the combative Huns got over the Volga river, and with this people living on the steppe started to flee, driven by the fear from the Huns. Already in 376 some Gothic groups burgled into the Roman Empire’s territory and asked for settlement permission, offering their military services in return for it. 4 years later new Gothic, Alan and white Hun tribes led by Alatheus and Saphrax forced out the settlement permission in Pannonia. Alan population lived on the territory of the present-day Tolna County: a grave of a mother superior has been found in Regöly. The high rank of the woman, who was injured on her head, is indicated by fibulas with huge gems, jeweled hairgrip, bracelets made of solid gold and golden flitters on her clothes. Her service had a piece which form is unique in the world, a “bird headed jug”.

In 433, the Romans were forced to yield the province, Pannonia to the Huns. A bronze caldron from the floodplain of the Kapos river, and the golden sword from Bátaszék stem from this period of time. This eastern population brought the habit of skull distortion with themselves that was also taken over by the attached German people. Attila, the king of the Huns died in 453, his Empire was destroyed by rebel tribes who fought against his rule.

In 527, another German people appeared in Pannonia, the Lombards. Although they lived only a little time, 22 years in the area of the county, two whole cemeteries were excavated, one Kajdacs, and one in Tamási. These people used richly decorated, stamped pots mad with potter’s wheel. In the winter of 566-567, their king, Albion leagued with Bayan Khagan, ruler of the people appearing along the lower-Danube, the Avars, against the Gepids on the othe side of the Tisa. The wars under the star of this league meant the end of the Gepid kingdom. But in the 1st of April, 568, the Lombards also had to flee from their new neighbors, so they settled down in Italia.

The Avars are descendants of uar-hun tribes, which fled from the attacks of the western Turkic. The previously nomad population – who were in fact here, in the Carpathian Basin really united – settled down, lived of farming and stock raising. The men wore decorated belts, which also indicated their rank, their belonging to the population. Their main weapon was the reflex bow, which made them to frightful warriors. In close combat, they used spears and two edged swords. Their firm horse riding was increased by using stirrups.

Szekszárd and its surroundings played a special role in the Avar age. Aside the road to Bogyiszló archeologists have found leftovers of an Avar village, which inhabitants were armed free people, but they were also typically producers of ceramics. The system of houses and workshops can be observed on the plotting board, from which the village structure is also imaginable. “Beyond the water” was the cemetery with 788 graves situated. In the early Avar age, two bigger ceramic burner centers were on the territory of the Khazar Khaganate, from which one ceramic burner is exhibited “in situ” – in original shape” – in our museum. The other burner center can be found around Dunaújváros.

The Avar empire fell to pieces in the first decade of the IX. century, after being weakened from inner revolutions, and being shocked by attacks from outside. The empire has disappeared, but the people impoverished remained in the territory, and continued with their way of living.

In 896, the Magyars took the Carpathian Basin with the lead of Árpád into possession. Tolna County belonged to the occupied territory of the prince (ruler), but this fact is quite hard to prove archaeologically. The Magyar settler’s groups were only present at the Danube crossings, on the Northern and Western edge territories. 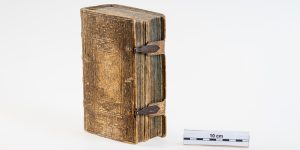 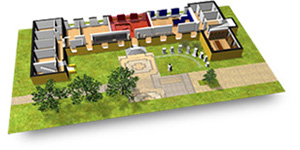 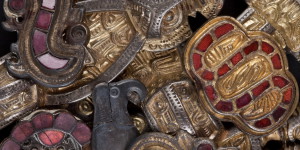